Light On The Hill

St. Lawrence Alumni: Where Are They Now & What Are They Doing?

Over 150 years ago, two Swiss diocesan priests founded a small friary in Mount Calvary, Wisconsin. Today, St. Lawrence Seminary High School has a student population of about 200 boys of Catholic Faith. Students from across the country and world have chosen to attend St. Lawrence and discern God’s calling in their lives as priests, religious or lay persons in the Catholic Church.

The alumni of St. Lawrence Seminary High School are a group of strong, intelligent, and inspirational men who have gone on to make astounding achievements in many different professions.

We sat down with two of our alumni to see what they’re doing today and to see the role that St. Lawrence played in their path to success.

First, we talked to John, a member of the SLS class of 1994. John went on to graduate from the United States Naval Academy and the Uniformed Services University School of Medicine in 2002. After completing a residency in anesthesiology and a fellowship in Cardiothoracic Anesthesiology, John went on to work at Walter Reed National Military Medical Center and is now the President-elect of the Medical Staff.

John says his favorite memory of St. Lawrence is not easy to narrow down: “Some involve sports, some involve, vacation time, some involve spirituality.” John goes on to highlight unexpectedly winning the State Championship in Cross Country, winning his first tournament in Wrestling, Friday and Saturday nights at the Gym, Canteen, quiet time in the Chapel, and even the trips to Chicago.

“Overall, my favorite memories involve the time spent with my friends and also with so many wonderful mentors … they all know who they are, and I'm glad to be able to still see them as recently as the last couple of years. I always look back at my time at SLS in such a positive way, as it set me up for everything that followed.” John said that the most valuable lesson he learned at St. Lawrence was that hard work, attention to detail, and efficiency are all that is needed to achieve your goals.

“St. Lawrence was the first educational, athletic, and life setting where I consistently applied myself with predetermined goals”.

We also had the chance to catch up with Joseph, a recent graduate and class president of the SLS class of 2016. Upon graduating, Joseph began attending the California Institute of Technology as an undergraduate student and researcher. When asked what his was most memorable about his time at St. Lawrence, Joseph says, “I have so many fond memories from St. Lawrence that it is so hard to choose. If I had to say which one was the most memorable, I would have to say making the haunted house my senior year. At the time, it was so much work and as the class president, the number of things I had to keep in mind was overwhelming. Now that I look back, however, I don't think I ever had that much fun with my brothers. I guess this is one of those experiences where at the time you just wish everything to be over, but when you look back you realize all the fun you had. We all worked hard together, and though at some points it seemed too much, teamwork and cooperation trumped all”.

Like John, Joseph mentioned a number of lessons or skills learned at St. Lawrence that are still valuable to him today. Joseph sums his feelings up by saying, “In this way, St. Lawrence will always have a special place in my heart, not merely as my alma mater but also as a wonderful institution that rises above its academic purposes and teaches its students the proper and respectful way to interact. The social skills that I have learned will last me a lifetime”.

John and Joseph are only two examples of our strong group of alumni. As a part of their mission, St. Lawrence looks to continue nurturing young catholic boys into mature, well-rounded men of faith who are prepared for a life of ministry as priest, religious, or lay leaders in the Church and world. 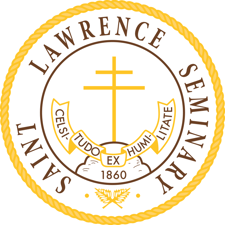 Protecting Children and the Vulnerable

To the heights out of our depths.